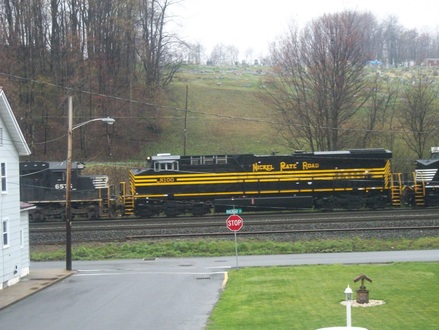 Brief History of the Nickle Plate Road
The New York, Chicago and St. Louis Railroad (reporting mark NKP), abbreviated NYC&St.L, was a railroad that operated in the mid-central United States. Commonly referred to as the Nickel Plate Road, the railroad served a large area, including trackage in the states of New York, Pennsylvania, Ohio, Indiana, and Illinois. Its primary connections included Buffalo, Chicago, Cleveland, Indianapolis, St. Louis, and Toledo. The Nickel Plate Railroad was constructed in 1881 along the South Shore of the Great Lakes connecting Buffalo and Chicago to compete with the Lake Shore and Michigan Southern Railway. In 1964 the Nickel Plate Road and several other mid-western carriers were merged into the larger Norfolk and Western Railway (N&W). The goal of the N&W expansion was to form a more competitive and successful system serving 14 states and the Canadian province of Ontario on more than 7,000 miles (11,000 km) of railroad. The profitable N&W was itself combined with the Southern Railway, another profitable carrier, to form Norfolk Southern Corporation (NS) in 1982.